You are here: Home / Blog / Adopting 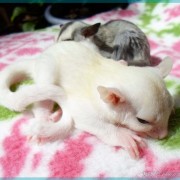 I wanted to hear from some other sugar glider owners so I posed a question to our Facebook group:

“What is one thing you wish you’d known before you got your first sugar glider(s)?”

These are all direct quotes from our group members. 🙂

“That they needed company! All the research I did said they did fine alone. (PP Website so its not really research)”

“THEY. POOP. EVERYWHERE. Their poop is forever. It is eternal. Nobody told me that xD”

“Wished I had known about PP. Bought my babies from them at the mall. But on the other hand I feel like I rescued them. They are healthy and happy. Would definitely only get them from a reputable breeder. Wish PP could be shut down forever!”

“How difficult bonding is with ones that weren’t well taken care of.”

“How addicting they are…if someone had told me that I would have around 30k in…a whole room devoted to them etc…I would have been like …yah, Im so not an animal hoarder….guess what…Im a suggie Hoarder LOL”

“That neutering generally is not cheap!”

“I second the poop thing. After I let them have play time in the bathroom I spend 30 minutes cleaning their little poops up! 4 suggies make a lot of poops! And diets and how hard bonding with rescues are. And how fast they make babies! When I got them I was told they had 1 joey a year so I thought I had time to get them neutered. Nope, I was told very wrong. Lol”

“Unfortunate Medical issues that pop up. And the littlest thing you didnt know about or to look for in 30 minutes could mean the point of no return. Rip Mimi”

“Get the biggest cage that you can fit in your house (because you will only want the best for them) and go ahead and set up a room just for them and all of their stuff just as if you were bringing home infant babies…lol! Suggie proof the room and be prepared to want to spend every waking moment with them.”

“Diet. Diet. Diet! When I got my first in ’96 there wasn’t any info on diet. My first little guy would have been so much happier on a staple diet and of course… with a friend!”

“Thinking we are “only” going to have two.”

That it is far cheaper to buy exactly what you want/need vs just getting by and upgrading. that also goes with the number of suggest you want. I wanted a colony of at least 4. It would have been FAR easier to purchase 4 glides from a single breeder at the same time vs the constant intro process.”

“I wish I would have thought about the fact that my hands crack and bleed in the winter and it would be extremely painful to hold them. I had to rehome them because of it.”

“I wish I would have known about breeders, lineage and the importance of having more than one.I could have paid less for a lineaged male that was neutered than I paid for mine without lineage who wasn’t neutered. Only because our neuter is so expensive where I live…it costs twice as much as the glider did.”

“I wish I would have known how ADDICTIVE they are!! Lol I know have 7 with two more on the way!!”

“Locate a vet that sees gliders before you get one.”

“The smell but also how much we would all fall in love with them and loose sleep because we want to play with them all night ! !!!!!!”